A forum to air your views on Offaly GAA matters and beyond.
Post Reply
46 posts

How do we think we will fare Thursday night?
Top

Looking at the team, we seem solid enough at the back and have more than enough firepower up front but I’m a little worried about our midfield. We’re 2/7 in the odds so we really should be winning and then it’s Westmeath or Longford for a place in the Leinster final.
Top

Solid at the back and plenty of firepower up front with the likes of Jack Bryant.. I think our midfield is set out to be providers of quick ball into our inside line, i know from watching young Morgan Tynan at minor level that he has a sweet and accurate left boot to be able to deliver that killer ball that will make our scorers shine. We will see how it goes but i am optimistic that this team can challenge in a Leinster Final
Top 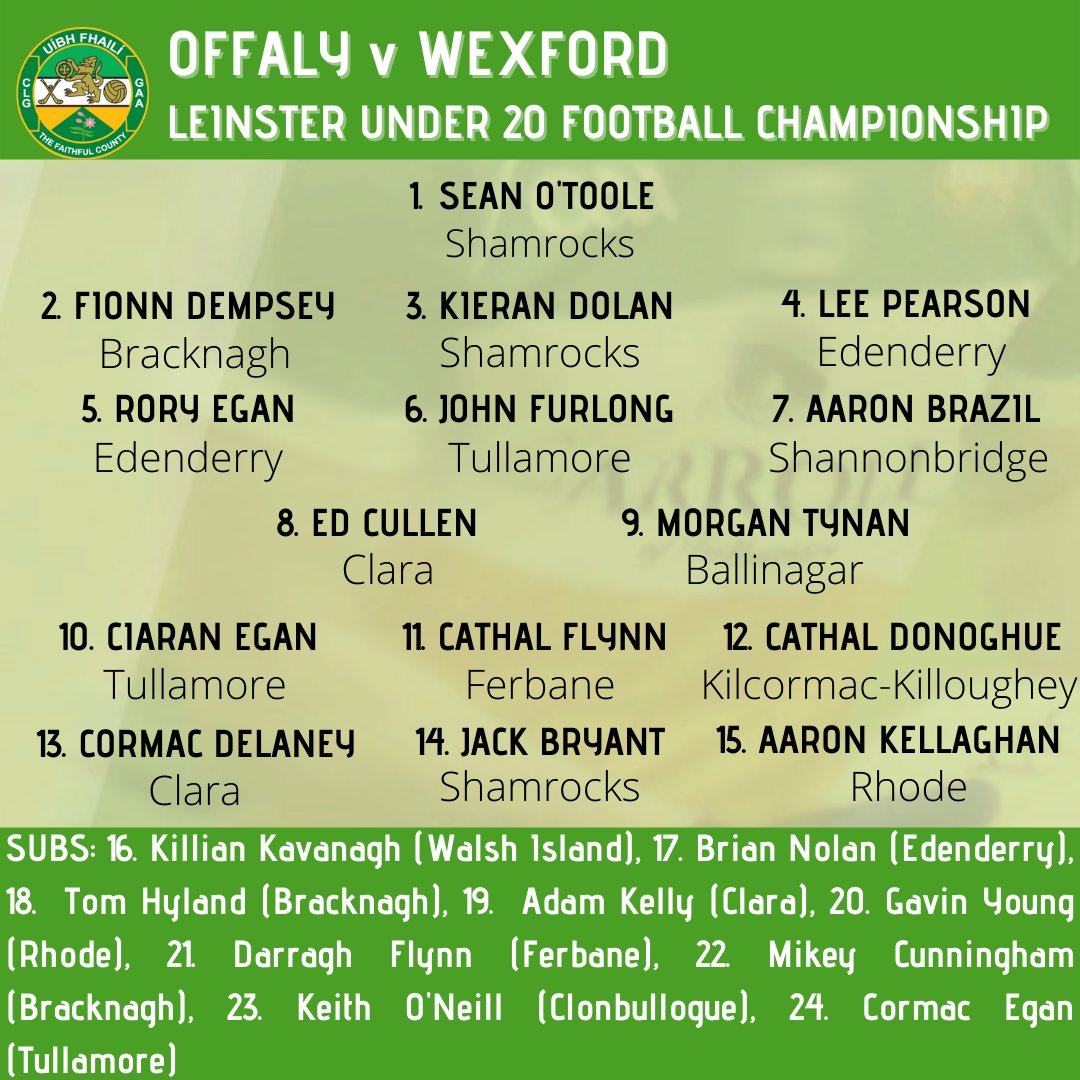 Kildare are up next for Offaly U20 hurlers.
Top

They just about fell over the line in the end after leading 1-10 to 0-06 with 15 minutes left, good to get a win all the same and they’ve a great chance to get to a Leinster final now against Westmeath who beat Longford on penalties.
Top

First half we defended very well, and i thought John Furlong at centre back had a great performance. Morgan Tynan in midfield was a huge asset until his injury, the balls he was delivering were a joy to watch and his free was brilliant, is his club ballinagar junior ?? surely with him they will compete for that championship. Jack Bryant looks like he is going to be one of our future senior stars.
Top

Great win vs kildare tonight for the hurlers.
Top

Yes great win, always good to beat the Lillies no matter what grade, a draw at the break Offaly really pushed on and dominated the 2nd half, playing the Dubs next, Kilkenny seemed to have struggled against Laois.
Top

Offaly would have been well aware that Kildare were a threat after they knocked out Wexford despite being a man down.
Kildare lead by a point just after half time so it was impressive that Offaly closed with 2-14 in the second half.
Top

A competitive first half of action in Tullamore gave way to a one-sided second 30 minutes in the Leinster U20 Hurling Championship, as Offaly outscored Kildare by 2-14 to 0-4 after the break up until David Qualter’s late consolation goal for the Lilies.

Powerful running and a solid platform of possession meant that Kildre free-taker Liam Dempsey had plenty of opportunities in the first half to add to the 0-14 he scored in their first round win over Wexford. He shot nine points from nine chances in that half hour, and while Offaly had a greater range of scoring threats, picking off some excellent points from Cian Burke, Luke Egan and DJ McLaughlin, the game was finely poised at the interval, 0-11 each.

Once Muiris Curtin opened the second half scoring, Offaly ran rampant with six points on the spin. Wing-forward DJ McLoughlin scored one and set up another in that run, but the real key to the game was the switch that saw Joe Ryan go to full-forward.

After a brief revival from Kildare either side of the water break cut the gap to three points, 0-19 to 0-16, a mazy run from Nolan set up McLoughlin after 49 minutes, and suddenly Offaly had daylight and Kildare were visibly crestfallen.

A flurry of points made the win safe before Ryan and Qualter traded goals at the death to complete the scoring.

Well done to the lads against Westmeath tonight.

Should of won by 6 or 7, we were the fitter classier team but missed a lot of chances.

Another Leinster Final at this age group in 12 months, green shoots at underage for sure now.

We haven't gone away yet you know

Should of won by 6 or 7, we were the fitter classier team but missed a lot of chances.

Another Leinster Final at this age group in 12 months, green shoots at underage for sure now.

We haven't gone away yet you know

Great to win but just need to win one or two of these finals. We’ve got to a fair few Leinster finals in minor and u20-21 in the last few years. If the u20 hurlers can get over Dublin, we’re back in the two finals again