A forum to air your views on Offaly GAA matters and beyond.
Post Reply
29 posts

Did anyone see that snoopy dogg video where he's in Brazil, some guy in the video has an offaly jersey on. Did anyone else notice this?
Top

Jesus turfbag thats been around a good bit, but yeah you're right, some fella is there with the old offaly jersy on him, the one they wore in 98, not only is he wearing the offaly jersey but i think he is also the only white guy in the video so it could very well be some BIFFO after sneaking onto the set!!

Yeh I remember that video. Just out of curiousity did anyone else hear the rumour that "Rockstar" by N*E*R*D* was written specifically about the Clara Senior Football team?

I always saw Clara as less N.E.R.D. and more N'Sync to be honest.
Top

I was on that very street a few months ago at a street party that goes on all day and night every friday. Lots of samba bands turn up and start playing. Lots of hot young ones too.

On the drive out to the street in Rio we passed lads playing football on the beach in organised leagues at 2am in the morning! No wonder Brazil are so fecking good at football.

So we were at the street party and I heard a loud bang. Suddenly people started running down the street away from the sound. One of the lads I was with ran towards it and saw that some dealer had been executed and blood was pouring from a gunshot wound in his head.

I wasn't wearing my Uibh Fhaili jersey at the time. I'll look out for it next time though.
It isn't the mountains ahead to climb that wear you out; it's the pebble in your shoe - Muhammad Ali
Top

Did anyone see Hector in Tanzania last night? There was a local in a town at the foot of Kilamanjaro wearing an Offaly jersey.
Top

According to someone over on the farmyard, there was Offaly jersey again in the crowd at the Centre Court in Wimbledon.
In recent years this has been a regular occurrence in SW19 .

It started a lively debate, didn't it - plenty of "colourful" abuse on both sides.
Enda McDonnell
Top

Bord na Mona man wrote:According to someone over on the farmyard, there was Offaly jersey again in the crowd at the Centre Court in Wimbledon.
In recent years this has been a regular occurrence in SW19 .

Yep I do watch a bit of Wimbledon and I spotted the jersey on Centre Court the other day,not for the first time.
Top

That lad with the offaly jersey has been there every year . There was a good shot of him on wednesday. Having the benifit of sky plus i paused it but still didnt recognise him
Top

For many years, the man wearing the Offaly jersey at Wimbledon was Kieran Coyne from Clara.

Sadly, he passed away this year after a long illness.
The Dog chases the Car....the Car stops....the Dog can't Drive!
Top

The Offaly jersey in Wimbledon is back. 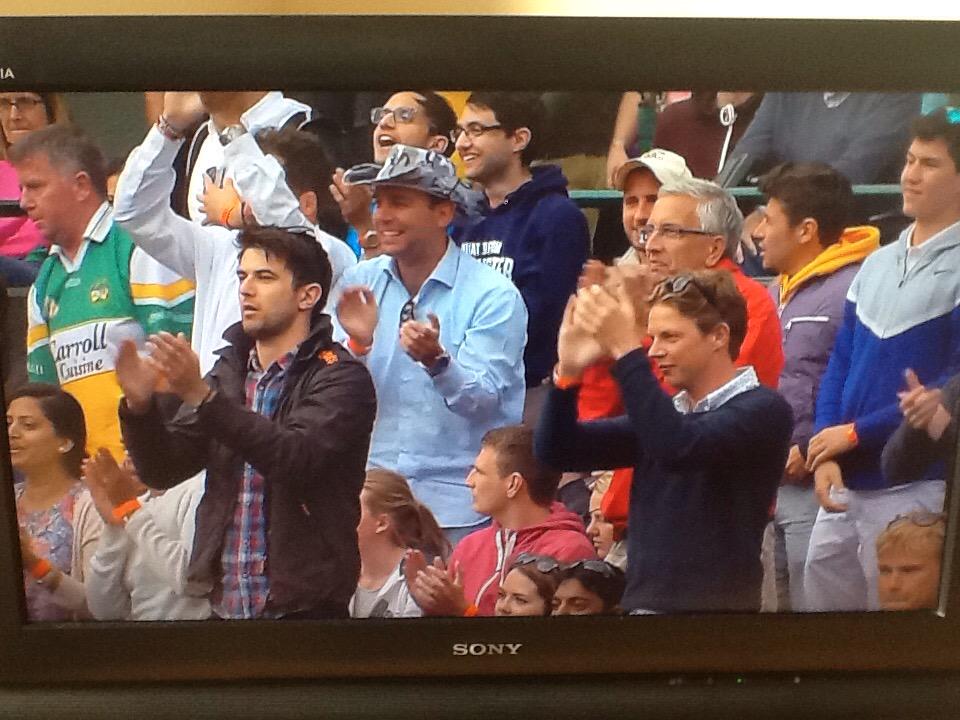 Peter Parker: I missed the part where that's MY problem.
Top

mykneehurts wrote:Did anyone see Hector in Tanzania last night? There was a local in a town at the foot of Kilamanjaro wearing an Offaly jersey.

Was it Mick Mc Donagh?
Top

Will O'Callaghan tweeted that the man in the picture is Pat Cornally from Clara. He used to travel every year with his friend who passed away (assume Kieran Coyne). Now Pat is keeping the tradition going.
Top

Spot on. Its Pat Cornally. Himself and Kieran Coyne always travelled to Wimbledon and Kieran never went without his Offaly jersey. Great to see Pat continuing the tradition.
Top
Post Reply
29 posts